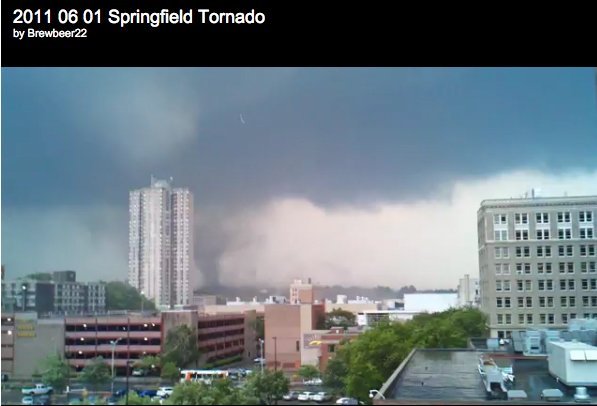 On the very day of a solar eclipse, in the southend and downtown of densely populated Springfield, MA, a tornado formed and tore through this New England city, leaving four dead. The tornado was latter described as an EF4 storm which typically has winds of 166 to 200 miles per hour. Only an EF5 storm is stronger.

Though tornado warnings has been in effect for most of the day, and despite the occasional small tornados that do form from time to time, no one expected a tornado of this force or magnitude.

“Getting severe thunderstorms is not very unusual for a late afternoon at this time of the year, but damaging tornadoes in heavily populated areas are rare,” Judge said. “We may have a couple of very slight tornadoes during the course of the year. They end up being in the forest somewhere, but not in major populated areas.”

The state normally averages about two tornadoes per year, with the last lethal twister in 1995.

Springfield is no stranger to catastrophic disasters. In 1936 and 1938 flooding from the Connecticut river was so severe that portions of the North and South End of Springfield no longer exist.

Springfield was founded as Agawam Plantation on May 14, 1636. Sometime four years later, the name of Springfield was adopted, but curiously this important event was left out of the town records, so we are left with the first recorded date of this settlement as the town’s birthday.

Nestled as it is in the fertile Connecticut valley through which the Connecticut river flows it would have been difficult for the English to settle here had not the native population been decimated by epidemics of diseases that were brought over by the first European adventurers.

Interesting this last fact seems to be reflected in the chart of Springfield itself. Pluto the planet of infectious diseases sits alongside Springfield’s Sun in Taurus.

The Taurus influence is most definitely reflected in the events of Springfield itself, Taurus being the zodiac sign representing cattle. In the original purchase of Springfield from 18 native families, provisions were made to compensate the natives should the English cattle damage the natives’ corn crops. Springfield was also the originator of the American cattle drive when in 1655 a herd was prodded from Springfield to Boston.

Looking at the charts of this violent event, we see that transiting Mars (as it is in heavens now) is making an easy energetic connection to Springfield’s natal Saturn. Unfortunately this Saturn is in challenge aspect to Springfield’s own Uranus and Mars positions, indicating that violent shake-ups are part of Springfield’s make-up.

Trines are known most popularly as “a good thing” but when in combination with any of what ancient astrologers called malefic influences, it only brings more of the same. See in the chart that Mars is the caboose of a mini-stellium involving Venus and Mercury. Venus here in this combination shows financial loss especially in relation to commerce. Downtown Springfield is the center of commerce for this city.

Transiting Jupiter is hitting the natal (birthchart) position of Springfield’s Mercury/Chiron combo. Mercury having to do with communications, Chiron-wounds and Jupiter shows the big time media attention this event has generated.

Below the chart is a YouTube video of the tornado itself. 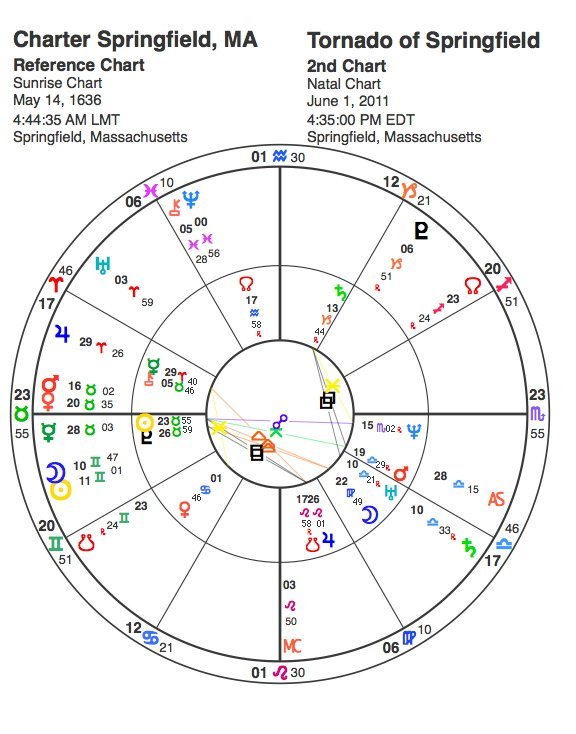 5 thoughts on “The Astrology of Disaster: Springfield, MA’s Deadly Tornado”