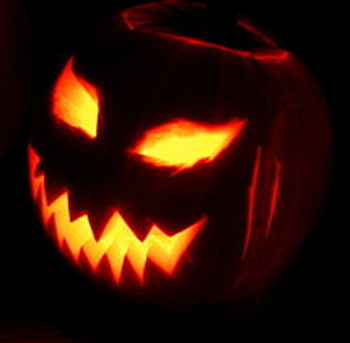 Do you know someone who fits this description? “God doesn’t want him, and the Devil thinks he’s competition.”

The Irish legend of the Jack-O-Latern describes just one such person, Jack the Smith.

As the story goes, several centuries ago amongst the myriad of towns and villages in Ireland there lived a drunkard known as “Jack the Smith”. Good time boy Jack was a deceiver and manipulator. The Devil overheard the tale of Jack’s evil deeds and silver-tongue. Unconvinced and a bit envious of the rumors, the Devil went to find out for himself whether or not Jack lived up to his vile reputation.

Typical of Jack, he was drunk and wandering through the countryside at night when he came upon a body on the road. Overturning the body, Jack found the Devil leering at him with an eerie grimace. Jack realized the Devil had come to collect his malevolent soul but Jack had no intention of facing heavenly judgement or the fires of hell. Meeting the Devil like an old friend he wheedled and flattered the Father of Lies so that the Devil was feeling like the Jack was a kindred soul. Wiley Jack made a last request, to get one more drink before he was carted to Hell. The Devil fascinated with this human incarnation of himself, escorted him to the local pub where Jack proceeded to tie one on. Jack entertained Beelezebub, with his drunken tales for many hours. But it became obvious to the Devil, that Jack had no intention a stopping at one, two or even three drinks and he called for the tab to wind up his business with the drunkard. When the tab came due, Jack, of course, found himself a bit short. Jack to the Devil’s surprise asked him to pay the tab. The Devil, of course, had no means to pay himself. Jack then convinced the Devil to pull a trick on the bartender and metamorphose into a silver coin with which to pay. Shrewdly, Jack stuck the now transmogrified devil coin into his pocket, which also contained a crucifix. The Devil, bound by the crucifix was unable to escape his form. Stuck he agreed to a demand of Jack that his soul be spared for ten years in exchange for the Devil’s freedom.

Exactly ten years to the date upon which Jack originally struck his deal, the devil once again found him and demanded his due. Again Jack had no intention of going to Hell, and using all his loquacious wiles convinced the Devil to climb an apple tree to retrieve one of the fruits. Once the Devil was in the tree, Jack stuck a bunch of crucifixes in the ground around the tree, stranding the infuriated demon in its branches. Jack demanded that the Devil never take him into Hell, and Satan reluctantly agreed.

Jack eventually died, but because of his sinful ways was not admitted to heaven. He wandered in the dark and lonely spaces between this life and the next, having no place to go, and no rest for his soul. Figuring it was better to suffer in hell, than suffer alone, in desperation he came to the gates of hell seeking admittance among his own kind. Standing before the entrance of his dominion, the Devil laughed at Jack, taunting him. “You thought you were so clever, tricking me. Now you see that you have tricked yourself out of your last refuge. By our own agreement I can’t let you inside these gates. But to remind you forever on of your folly, here is an ember of my fiery dominion, for you to carry as you wander alone through eternity.”

Jack put the ember in a hollowed out turnip, and wanders still, with the fragment of the fires of hell illuminating his face with its ghastly light.

Jack’s story is a Halloween tale illustrative of how the planet of illusion, Neptune, works in our lives. Neptune in its most enlightened form can lead us literally to heaven, but it also capable of great deception. It is the planet that rules all forms of lies, self-destructive behavior and substance abuse. Jack deceived himself into believing he could escape the consequences of his behavior. Whether we follow the path of enlightenment or the path of self-deception, Neptune teaches us about our individual illusions. It just might show you the devil you know.