(Astrology Explored) “This is not a rehearsal”—Robert Phoenix on FB

One of five nuclear reactors at Fukushima Nuclear plant is in danger of an imminent core meltdown, as an explosion rocked the area around the plant and clouds of black smoke billowed from the facility. The roof of the building has collapsed and 50,000 within a 20 km radius are being evacuated. Japanese officials now report that the core may have “partially melted.”

In a surreal counterpoint residents are told to cover their mouths as much as possible.

The 8.9 earthquake that hit Japan is the proximate cause of the meltdown as power was disrupted to the plant putting the electric powered cooling system at risk of failure. Two back-up systems failed, leaving the battery generated back-up system with 8 hours of battery life to power the cooling system. Radioactive gas was vented periodically yesterday in an attempt to relieve pressure in the core. The gas is reportedly 1000x over the legal limit for venting radioactive gas.

The power plant is an older model, built in 1966 without the safety measures of more modern plants. As a result of this meltdown radiation can be blown” across the earth as far as the heavily populated western portion of the United States.

As the news from Japan on this horrendous accident trickles in at a snails pace we are left to wonder is this the China Syndrome in Japan?

Looking at the chart of the commission of this power plant one wonders why people do not employ astrologers to pick the days to start new enterprises. Certainly if they had tried they could not have picked a worse day especially with something as potentially dangerous as a nuclear power plant.

The chart of this power plant features a fiery Aries sun conjunct the planet of wounds, Chiron. This Sun is in challenge aspect to Mars, the plant of action, which in turn is in aspect to the planet of transformation Pluto. Pluto in turn is opposite the power plants Sun. This configuration is known as a T-square.

In addition Pluto in the chart of this troubled plant is opposite its heart, a Moon in the zodiac sign of Pisces.

The important thing to remember about a T-Square is that when something hits one part of the T-Square the energy runs around the whole configuration, rousing in a sense a sleeping giant to action.

The trigger to this event is Uranus, the planet of sudden events, which just moved into the sign of impulsive Aries. Aries is ruled by the planet Mars and unfortunately, transiting Uranus is now in challenge aspect the natal Mars. Uranus/Mars combinations are notorious for indicating explosions.

With the planet of deception sitting alongside the planet of abundance Jupiter in easy energetic connection to the Sun in the natal chart you can be sure that not only are we not being told the whole story, the whole story is much worse than we think. Furthermore, it is imperative that all of three power plants that are functioning on the site need to be shut down, because there are serious problems in the way that plant is operating that will only manifest in further life threatening scenarios.

We have a whole lot to learn about the Fukishima explosion. Unfortunately, we are going to learn it later rather than sooner. 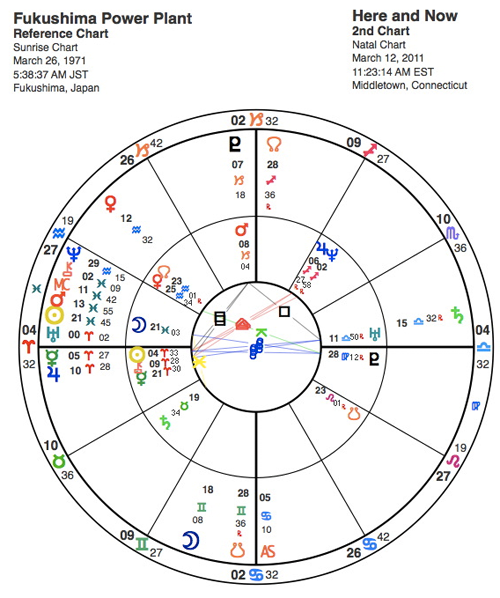 Read the update and the reason why Fukushima in Astrology of Disasters–Fukushima Power Plant Update.