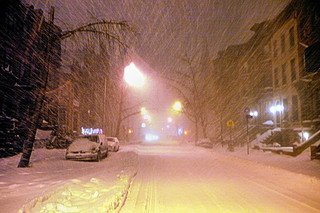 (Astrology Explored) Someone asked me astrologically what the weather for our region is likely to be for the winter. With furnaces firing up here in the chilly Northeast, its important to know just how fast that oil is going to burn up. To get an idea of the weather, astrologers will look at the eclipses proceeding the winter months ahead.

Our next solar eclipse is in on November 13, 2012, starting at 4:48 AM EST and culminating at an exact conjunction of the Sun and Moon at around 3:48 PM EST. 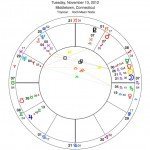 How interesting is that just as Saturn passes into the zodiac sign of Scorpio that the solar eclipse after that occurs in the in that zodiac sign too? These things don’t happen that often, so it punctuates the importance of this Saturn position for the next six months.

Saturn is associated with cold, and in water sign Scorpio, wet. Wet and cold usually add up to snow. Saturn is making an easy energetic connection to Neptune in Pisces and Chiron. But, in my experience, to get really bad weather, you need a T-square between Mars, Uranus and some other heavy hitter, like the Sun or Jupiter or Saturn, and we don’t see that in this chart. Plus Mars is in the fire sun of Sagittarius, indicating warmer weather. This seems to indicate wet, blustery weather for the winter and not a remake of the hellish winter of 2010.

But we aren’t done yet. We still need to look at the second part of the eclipse pair, the lunar eclipse.

On September 26, 1996 a lunar eclipse occurred on the same day as a Sun-Saturn conjunction, where the Moon is conjunct Saturn and both opposite the Sun. The data surround this event appears in Figure 3.c where temperatures during the entire period are well below the mean. 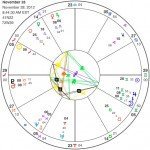 It is interesting to note that the Sun and Saturn won’t be opposed until next April, so it doesn’t affect us now in terms of cold weather. We’ll have to look at other indications.

This Lunar Eclipse is a wild ride especially compared to the relatively sedate Solar Eclipse. Pluto, the planet of transformation and Mars, the planet of war squares Uranus. The Moon in Gemini is conjunct Jupiter and in stress aspect to Saturn/Venus. Saturn/Venus is in stress aspect (inconjunct) Uranus. The Sun/Moon opposition is square Neptune/Chiron. The moon is in the air sign Gemini, the Sun in fire sign Sagittarius. It looks like there is more than average number of collisions of wet and warm air generating rain and wind for significant portions of this winter season. That is not to say we won’t have snow. We just won’t have it above our heads as we walk out the door the way we had it in 2010. My impression here, is while the weather won’t be very cold, there will be more wind and more than average disturbances in the atmosphere that will bring wet weather. By temperature, this coming winter seems to be more like last year. 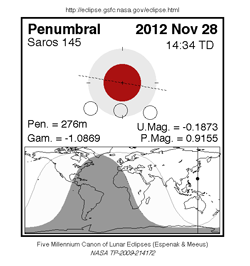 It will be interesting to see how this plays out. In the meantime however, its time to figure out what your oil bills will be for the winter season.

U. S. Energy Information Administration predicts an average of $3.80 a gallon. We are looking at about $2,000 to $2,500 to heat a twelve hundred foot home from now through February. (Note: My home is smaller than the statistical average) This is a little less than what I spent last year but not by much. So look at what you spent last year and start making plans to pony up that amount of cash. Prices are below the EIA’s average prediction right now, so if you want to save a little bit of money fill up your tanks at these lower prices before colder weather drives it up.