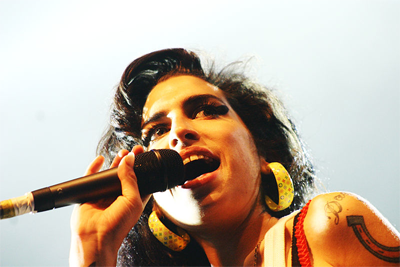 It is more likely than not that vocal artist and songwriter Amy Winehouse lost her life through her use of drugs on July 23, 2011.

Amy’s addiction was apparent to everyone but herself. In her 2007 hit “Rehab” she sings:

Friends and family are devastated by the passing of Amy, a brilliant, yet troubled musician. However, their story is shared by millions of people facing the consequences of their own or a loved one’s addiction.

Wikipedia tells us that Amy’s mother thinks the path to addiction was forged when Amy lost her grandmother in 2006. But the truth is, addiction is long, slow, insidious process that starts well before the addict’s life is disrupted by their illness. Winehouse’s history is detailed at length on Wikipedia, demonstrating a six year history of use that could not be hidden from the public.

During this time Amy had periodic but brief stays at rehab facilities. The last stay was when Winehouse entered the Priory Clinic on 25 May 2011, where she stayed for one week.

But why would a woman with so much talent, so much acclaim, so much of a future in front of her destroy her life with the use of drugs?

David Lende and Gregory Downey break down the steps to the path of addiction as vulnerability, training, intentions, and meaning, compulsion and craving in their blog Neuroanthropology. Though the steps can be traced, the authors admit:

So how do you become an alcoholic or addict? How do you go from something fun to something all-encompassing? This question matters deeply. One fact, often overlooked in all the moral angst about addiction, is that most people who try alcohol or drugs do not end up addicted to them.

Astrology holds a few of the keys to understanding this question.

Amy has a classic astrological symbol of substance abuse in her chart, her Sun/Mercury combination in the hyper self-critical sign of Virgo is in challenge aspect to the planet of substance abuse, Neptune. Since we don’t have a her birth time we can’t say for sure if her Moon is actually conjunct Neptune, but it is possible and because it does fit, I am reading the chart with that combination in play. While Neptune talks about substance abuse, Pluto is the planet of addition. Here in her sunrise chart, Moon/Neptune showis an extreme openness to psychic impressions. This Moon/Neptune combo demonstrates sensitivity and vulnerability all by itself. However, this combo is in “friendly” (sextile) energetic connection to Pluto ratcheting up this sensitivity more than a few notches. In addition, this sextile from the Moon/Neptune in the exploratory sign of Sagittarius in aspect to Pluto lured Amy to examine the dark side of life. She did this with the false sense in the way that Sagittarians believe, that nothing can harm them. Furthermore, Saturn, the planet of our fears, sits along sit that Pluto (which suggests some even darker things) and this combination is in stress aspect (inconjunct) to the planet of wounds Chiron.

A drink or two a day, say at a meal, keeps a person at the same level. A binge at that one holiday party leaves a nasty hangover and not much more. But regular, intense use – that does the trick, just as with interval training. To expand on this concept, I would go further and say that regular training can produce adaptations – a habit – over several weeks or months. Periods of more intense use then provides one main way to ratchet up the level of engagement with alcohol and drugs.

Amy’s father, Mitch, denies that Amy was into drugs since age 13. He said in a 2007 interview:

“One of the things has been mentioned in article is that I said Amy was a drug user from the age of 13. Absolute and complete nonsense. She was not.
“In fact, she was proud of the fact that she didn’t take any class A drugs at all throughout her career. We know she smoked weed – it’s in all her albums. It’s only been in the last three or four months that the journey has taken a different route.”

This is utter nonsense; denial of the highest kind. It speaks much to the parent’s attitudes toward drugs. She started working professionally around the age of 14 and writing songs about using pot. You can debate all you like about whether or not pot is harmful, but for a person with a predilection to substance abuse, pot is just as harmful as alcohol in starting down the pathway to addiction. Instead of dealing with problems, the substance abuser uses the substance to cut off the pain of feelings of pressure, lack of confidence and fear of failure. Being a teenager is hard enough; working professionally in the music world at that age is impossible for a person of that age to manage sanely, especially if the parents aren’t providing effective support.

One can look closer in the chart and see that with Neptune so close to the moon, someone in the home was using substances, probably alcohol, providing a role model for use.

So Amy learned from family experiences and her own that using substances regularly provided relief from the pain of living—at least at first.

Even being vulnerable and engaging in heavy drug use is not enough to turn a person into an addict. One of the main tricks is getting them to turn themselves into an addict. Crucial to this process is linking a subjective experience with a subjective action, tying together wanting something and engaging in doing it. They need to have reasons to use – and just as we knit together that sentence so easily, so drug users must engage in each part of that sentence. Specific individuals, the development of compulsive involvement, motivations and expectations and desired outcomes, and the act of using—those things come together through the elusive becoming.

Winehouse married on-off boyfriend Blake Fielder-Civil (born April 17, 1982), a former video production assistant, on 18 May 2007, in Miami, Florida. Fielder-Civil was quoted in a British tabloid as saying he introduced her to crack cocaine and heroin.[131] During a visit with Mitch Winehouse at the prison in July 2008, Fielder-Civil reportedly said that they would cut themselves to ease the pain of withdrawal.[Winehouse said] the “whole marriage was based on doing drugs”

Winehouse wrote in her song Rehab:

The man said ‘why do you think you here’
I said ‘I got no idea
I’m gonna, I’m gonna lose my baby
so I always keep a bottle near’

Amy and Blake were less than a year apart, so the critical outer planets, Pluto and Neptune shared similar positions in their respective charts. As such, Blake’s outer planets reinforces the inner dynamics of substance abuse and addiction. In addition Blake’s Sun is in harmonious energetic (trine) connection to her Mars/Venus combo which trine her Neptune. This forms a grand trine which initially is a feel good combination and considerable sexual heat. But Blake’s Sun is in opposition to both their Pluto positions. This is the set up for the Plutonian relationship, where the two people involved feel compulsively drawn to each other.

The pain generated by such a relationship only fueled a never ending merry-go-round of pain and seeking a relief from it. She wanted him and feared losing him. Doing harder drugs was the price she paid for staying in a relationship that was as addictive as any drug. Thus her intention was cemented. To keep her husband, she kept doing drugs. In the end of course, it all fell apart, but not before she was trapped into the compulsion to do some very serious drugs.

Blake made himself done with Winehouse by getting involved with a model. Winehouse was left alone with her addictions. But even should Winehouse detox in one of her one or two weeks stay in rehab that isn’t enough to put a person on the path of sobriety. By this point in the addictive process the neurochemistry in an addict brain is changed.

Drug craving itself is mediated by glutamate receptor activity in the hippocampus—the seat of learning and memory. A fundamental branch of what we might dub the “relapse pathway” runs through the glutamate-rich areas of the hippocampus. The puzzling matter of craving and relapse began to come into focus only when certain researchers began to rethink the matter of memory and learning as it applies to the addictive process. This led back to the role of glutamate, and it gradually became clear that the drug high and the drug craving were, in a manner of speaking, stored in separate places in the brain. Research at the National Institute for Drug Abuse (NIDA) strongly supports the hypothesis that drug memories induced by environmental triggers originate primarily in the hippocampus. And glutamate may be the substance out of which the brain fashions “trigger” memories that lead certain addicts down the road to relapse.

On the day Amy died, transiting Mercury, the planet of memories is oppositing transiting Neptune and is conjunct Amy’s Venus/Mars combination. Memories were triggered, of Blake, the failed relationship, and the drugs they took together. It is not a coincidence that earlier that day she purchased the combination of drugs that she used so often with Blake.

Two weeks here, a week there is just not enough time to overcome the reordered neurochemistry, retrain your thinking and learn how to live a sober lifestyle. It’s pretty clear that Winehouse never did get clean for any substantial period and she certainly didn’t get enough rehab to learn how to stay clean. Unfortunately for Amy, her refusal to take rehab seriously left her vulnerable to the ultimate toll that drugs can exact.

Photo published under a Creative Commons License as posted on en.wikipedia.org/wiki/File:Amy_Winehouse_Eurockeennes_2007.jpg. 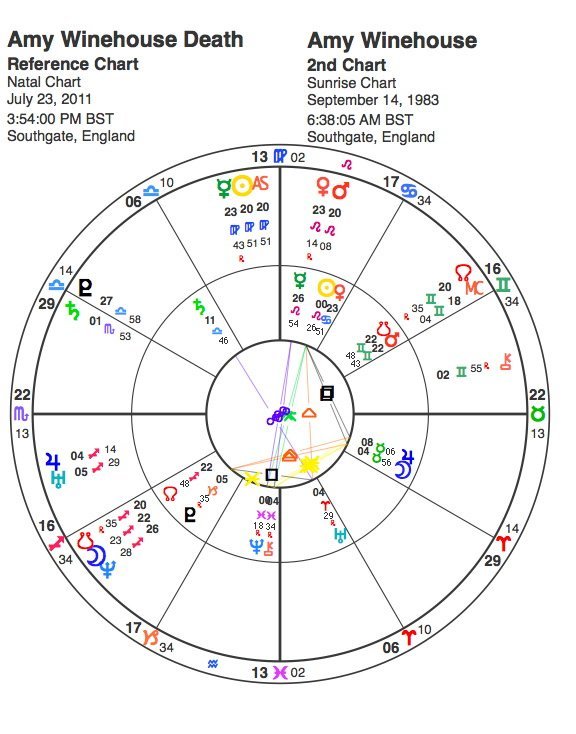 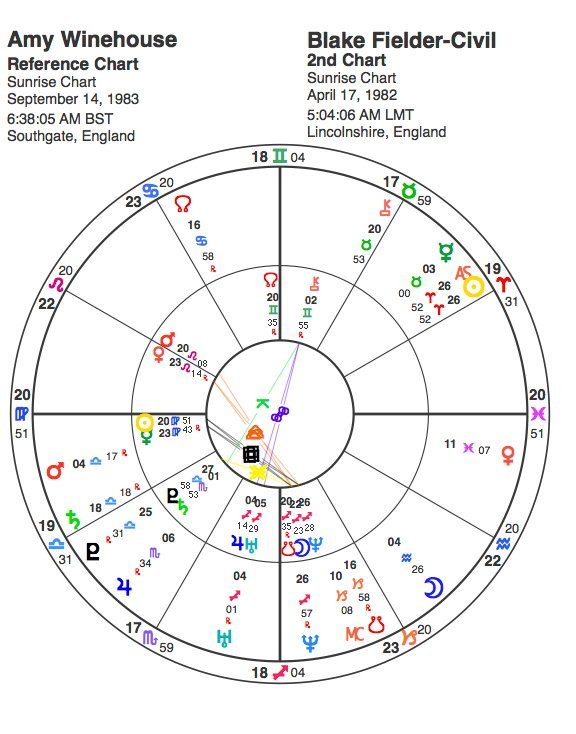 3 thoughts on “The Astrology of Substance Abuse: Amy Winehouse’s Addictions”