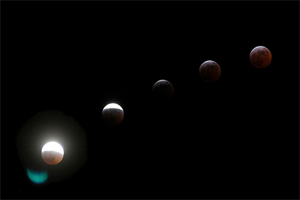 The last time it happened was in 1991. The next time it will happen is in 2094. This rare is astronomical and astrological event is a total lunar eclipse that falls on the Winter Solstice.

Nasa tells us that the eclipse will be visible throughout most of eastern Asia, Australia, the Pacific Ocean, the Americas, and Europe. The eclipse will be visible after midnight in North and South America. The moon will be at its maximum northern position staying above the horizon a long time while the sun will be at its lowest point in the sky. This gives an special emphasis to the name of December’s full moon, the Long Nights Moon.

In Celtic mythology the Winter Solstice marks the death of the “old king” an allegory for the old year, and the birth of the “new king”, the New Year. There will be endings, but in these events are the seeds of new growth. In Celtic legend, the “new king’s” birth is hidden until December 24th, when the days start to visibly lengthen. The period in between the solstice and December 24th is called the nameless day, a period suspended between death and birth and belonging to the realm of the underworld.

Eclipses act like an exclamation point in the transit chart, marking by it position a point in your natal chart that will be of special emphasis in your chart for the next six months. When talking about the moon we are dealing with such topics as our mothers, the past, our home environment, the things that make us feel secure. This lunar eclipse will happen with the moon at 29 degrees of Gemini.

29 degrees of any sign, poised as it is on the cusp of the next sign, calls for a decision. Are we going to sit on our heels and have the world pass us by? Or are we going to go forward like the tarot card “The Fool” and fall into our next adventure? Seeing that the next sign is Cancer, which is ruled by the moon and talks about all the topics mentioned above, how is that going to translate into our lives? Cancer’s survival strategy is to hold on with a tenacious grip. But let us not forget that opposite that Cancer energy is powerful and transformative Pluto in Capricorn, wresting away, by force if necessary, the very things that make us feel secure. Whatever happens the name “Long Nights Moon” is an especially apt description.

So what do you look at in your chart to see where you will be concentrating your energies, where you want to hang on and where you should let go? Most people can look at which house the eclipse falls in, but more advanced students and also, professionals, can also look at the aspects to Mercury, the ruler of Gemini and Saturn, the ruler of Capricorn in their charts.

Photo published under a Creative Commons license from Flickr.