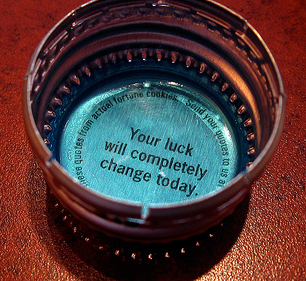 (Astrology Explored) Today the part of fortune in Leo is in line with my moon. What does this mean?

Not exactly a reader question, but this was a very long search string my site stats. It actually is a very good question.

The Part (or Lot) of Fortune is the one lot of all the Arabic parts that have survived into modern astrology. Lots were used since ancient times for predictive work long before secondary progressions became popular. There are said to be upward to 97 separate lots governing aspects of life from birth to death.

Lots are calculated with specific formulae taking the position of one of the angles, adding the position of one planet and subtracting another. The result is a sensitive part of the chart relating to the question at hand. However, in ancient astrology these positions were static on the chart, waiting a transit to activate them. Using transiting lots just wasn’t done! Imagine trying to calculate the position of a lot as the position of the angles shift every 4 minutes! However, advent modern computers and this is now possible. Actually, most modern programs calculate the Part of Fortune just as a matter of course, though I have yet to see documentation using this lot as a transit. This of course, prompted me to look at this on my own.

The Part of Fortune is an especially juicy lot as it shows just where you tend to have luck in your chart, acting in some ways as a second Jupiter position. As a transit it is almost faster than a speeding bullet. Even using very wide orbs, its effect lasts no more than two hours, so if you want to use it, you should plan for it and be quick about using it.

Here is an example from my own life. Working at one New Age Fair, the transiting Part of Fortune was moving over my Venus. For those that don’t know, Venus rules the acquisition of money. Before the lot came into orb I had no clients. As the part moved within orb and for the next two hours, business was brisk and I actually earned more than I usually do for one of these fairs. When the part moved out of orb, business dropped off again.

This is the sort of thing that might explain a sudden streak of hot luck in gambling that eventually runs cold.

For those out there who like to go to the casinos you might want to check out when the Part of Fortune transits Venus or the second house and play during that time to see what happens. You just might get lucky. Or you might not. This is obviously one area where I need to do a little more personal research.

So to get back to the original question about the Part of Fortune conjuncting the Leo Moon, well, darhling, you just know that for those two hour all eyes will be on you. If you’ve applied for home loan, you will hear some good news, or if you are trying to get pregnant this would be the time to get busy. Or maybe you’ll find some especially good bargains for the home during a shopping trip or you’ll go to a beauty parlor and be happy with the results. It is important to keep in mind that quick moving transits rarely have life changing events attached to them. So don’t get too excited when the transiting Part of Fortune moves over one of the planets of your chart. But don’t be surprised if something good happens either.

Photo published under a Creative Commons License from user caseywest as posted on Flickr.