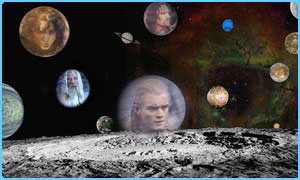 (Astrology Explored) It was bad enough the International Astronomy Union, upon the discovery of Sedna, went a little crazy and started reclassifying planets. Saying that size does matter, Pluto, the master of domination and control was reclassified a “dwarf planet.” Way to emasculate the lord of hell, IAU. Bad enough that the IAU cast out the perfectly lovely name of Xena and stuck that planet with the sucky name and mythology of Sedna. Now the CBBC (a division of the BBC) floated the information that astronomers are going to rename all the planets in the solar system after the characters in J.R.R. Tolkien’s Lord of the Rings. END_OF_DOCUMENT_TOKEN_TO_BE_REPLACED