(Astrology Explored) Newscaster: Mars stations in Virgo on the day of the Aquarian New Moon. Many astrologers have posted their take on this combo, but Astrology Media Press thought to ask the planets themselves, “What does it all mean?”

I am here at the celestial home of Venus, the goddess of beauty and Mars, the god of war. . .

Venus: (dressed as Marilyn Monroe speaking little breathlessly) And sex, don’t forget that he is the god of sex.

Newscaster: Yes, well this is a family show. (changing subject) I love what you are wearing.

Venus: Thank you. I am in the zodiac sign of Pisces right now.

Newscaster: And where is the man of the hour, Mars?

Venus: Um, yes. (Looks around over her shoulder).

Venus: Just where is he now? (Goes to doorway where there are stairs that leads down.)

Venus: (sweetly) Honey, are you down there?

Voice from basement: What?

Venus: (exasperated and in the breathless Marilyn voice) So sorry. He did know you were coming.

Venus: (shouting down the stairs again) Mars! The news people are here!

Mars: (from basement) What? I thought that was Thursday. Look I’m a little busy down here with Uranus.

Venus: (rolls her eyes. There is a knock at the door.)

Venus: Sorry! (rushes off to the door and finds Pluto at the door)

Venus: (flustered) This isn’t a good time. We’ve got a news interview.

Pluto: Really? (Pushes his way past Venus).  I bet he’s in that old man cave of his. Has Uranus gotten here yet? (Pluto heads down the stairs)

Venus: (to newscaster) So sorry. He IS stationed right now. He tends to become focused on one thing when he stations and he IS in the zodiac sign of Virgo, so he is zeroed in on the minutia of what he is doing. (goes to stairs again.)

Venus: (shouting louder) Honey! The news people are waiting for you!

Mars: (shouting up the stairs) Just a minute! We are going over last year’s facts and figures! We’ve just got to get it right this time!

Venus: (perplexed) Last year? Honey, this is no time to do the taxes!

Various voices from the basement: Yeah! That’s right! We’ll do that again! That will show them! Good job! Be careful with that!

Newscaster: (counting on his fingers and growing alarmed) Mars, Uranus, Pluto. Isn’t it almost a year from when the Fukushima power plants exploded?

Venus: (absently, still staring down the basement steps) I suppose. (raises her voice in annoyance) Mars!

Sounds of footsteps on the stairs. Mars makes his appearance.

Mars: (Shakes newscaster hand) Hello, good to see you. I hope the little woman here (gives her affectionate squeeze a little too hard) has been making you comfortable. Caught me in the middle of a meeting. Lot’s of things coming up! Thinks are going to shake, rattle and roll! My friend Uranus will see to that. Pluto will help too. But we are still working on the details. Get in touch with my boy, Mercury, he handles communications . . .say around January 28, when he meets up with the Aquarius’ new moon point, when he’s at 2 degrees of Aquarius. All the details will come out then. Uranus rules Aquarius, don’t you know. Actually, Saturn used to rule Aquarius, but when Uranus came around, he was MORE than happy to share the work.

Mars: Oops! Got to go! (He bounds down the stairs again)

Venus: Oops? What the . . (She shouts down the stairs like a fishwife) Mars! What are you doing down there. You better not leave a mess for me to clean up!

Mars: (calling up the stairs) Don’t worry, sweetheart. I’ll take care of it.

Venus: (turning to newscaster, exasperated) As if he ever does.

Newscaster: (to audience smiling broadly) So there you have it folks. Expect some exciting things coming your way! 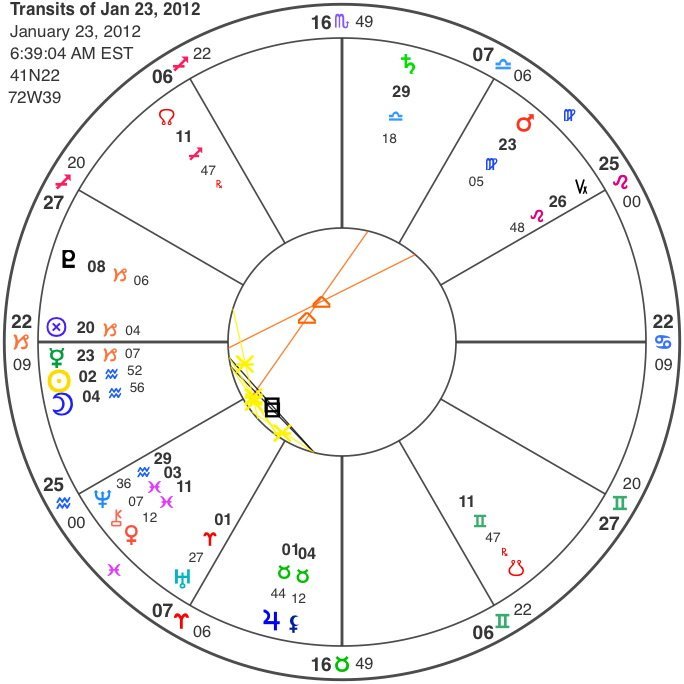 If you would like a question answered on these pages send your birth date, birth place and birth time along with your question to starrynightastro@aol.com. Sorry, time constraints prevent me from doing readings on anything other than a single question.

Photo created from image under Creative Commons License from Flickr.

Its not easy being a fixed sign or having a planet in a fixed sign these days. Those with the zodiac signs Taurus, Leo, Scorpio or Aquarius have the planet of action, Mars, to deal with. Folks, Mars here is no lightweight. Wherever Mars is sitting with, making a challenge or tension aspect to whatever stuff you have in a fixed sign is where you are experiencing trouble, with a capital “T”.

What is giving Mars its special super powers is that it is taking its own sweet time traversing the sign of the Lion, moving forward, then retracing its steps in what astrologers and astronomers call retrograde motion. From the vantage point of planet Earth, Mars appears to be moving backward in the heavens. What actually happens is that the Earth in its tour around the Sun has temporarily sped past Mars. Mars then plays catch up with sister Earth, creating what appears in the sky, if you were taking stop motion photography, a loop in its orbit.

Leo likes to fix attention on him/herself and Mars is the planet of War, so put that heady cocktail together, you get something akin to C-4 explosive primed to blow. However, it is well known that fixed signs just don’t like to admit there is a problem, much like the gentleman I recently spoke with that denied having issues in the bedroom despite having Saturn in Scorpio in the Eighth house, so it takes some time before the first shoe drops. When it does, the second comes in rapid succession.

So here is how it works. Either you book a consult with an astrologer, or you grab a hold of your chart and find where your fixed signs are and check out the description below. Oh, we all have them, somewhere, even if it is a fixed sign on house cusp, so no one is immune to the powers of Mars Retrograde, just some feel it more keenly than others.

Like everything else in astrology, it is all about cycles, and eventually the cycle passes. Mars is due to move onto Virgo in June. Aren’t we looking forward to that one!

Ascendant/Natal planet in the First House making inharmonious aspect to Mars or traveling Mars in the First House—You may embark on a mission to reshape your body, which wouldn’t be a bad thing except that you are driving everyone else nuts while you do so. Stop insisting your significant other take predawn runs trips to the gym or jogs through the neighborhood just to keep you company. Even if you don’t need your sleep, your SO does.

Natal Planet in Second House, etc, etc, or Venus in inharmonious aspect to Mars or traveling Mars through the Second House—Every fraking bill you’ve been putting off suddenly comes due. Worse yet, its like they’ve met in some secret place in the walls of your house and procreated. Call your financial planner, your accountant or some other trusted advisor to help you make sense of it all, because frankly, you are just too ticked off about it to plan this out rationally.

Natal Planet in Third House making inharmonious aspect to Mars, Natal Mercury making inharmonious aspect to Mars, or traveling Mars through the third house— Your brothers and sisters have stopped talking to you and you don’t understand why. It’s because you can’t stop challenging them, or your innate obnoxiousness is shining through. Keep to short written notes when communicating with them and forget the emotionally charged phone calls. Attend to all your school work or company reports promptly.

Natal Planet in the Fourth House making inharmonious aspect the Mars, Natal Moon making inharmonious aspects to Mars, traveling Mars through the fourth house—Issues in the home or with your mother take central stage. This is especially tough if you aren’t getting along well with the spouse or Mom in the first place. Everything is an argument or a pout. The priority here is learning what constructive action is needed to minimize conflict, and lucky you, the ball is in your court.

Natal Planet in the Sixth House making inharmonious aspect Mars, Mars traveling through the sixth house—The good new is that the problems here will resolve themselves by early summer, and are more scares than actual problems with your health. However the shock of having a potential major health issue rearing its ugly head can push you into a healthier lifestyle which isn’t such a bad thing either.

Natal Planet in the Seventh House making inharmonious aspect to Mars, Mars traveling through the Seventh—Partnerships are tested under this transit. (Read Forth house description.) You have suspicions your life partner is cheating or your business partner wants to jump ship. The issue is to dig deeper past your partner’s actions and find a way to communicate openly and honestly about how you feel. Maybe, just maybe he or she will also.

Natal Planet in the Eight House making inharmonious aspects to Mars, Natal Pluto making inharmonious aspects to Mars, Mars traveling the Eighth House—I’m not going to expose what it is that troubling you because you know what it is and you don’t want the whole world to know. I will tell though, it just really is time to make an appointment with a good therapist.

Natal Planet in the Tenth making inharmonious aspects to Mars, Mars traveling through the tenth—Everyone wants to challenge your authority. Mars upsets the apple cart in your career sector. No one wants to let you do what you need to do. Suddenly everyone in the boardroom refuses to listen to you. It sucks and there is nothing you can do that won’t dig you deeper. Maybe you should re-evaluate why you stay in a situation where your talents aren’t appreciated.

Natal Planet in the Eleventh making inharmonious aspects to Mars, Uranus making inharmonious aspect to Mars, Mars traveling through the eleventh—Read the fourth house description and substitute the word “friends”. Activities in organizations don’t go so smoothly either. Keep your head down and don’t challenge anyone unless you are ready to nuke them all. Then where will you be?

Natal Planet in the Twelfth making inharmonious aspects to Mars, Neptune making inharmonious aspects to Mars, Mars traveling through the Twelfth.–Like the description for the Eighth House, you need some outside help to straighten out your insides. Whether it is you or a loved one with the substance abuse or mental health issue, or the SO’s (or worse yet, your) affair come to light, put the pedal to the metal to find someone to help you through this. This is not the time to go it alone.

Photo is public domain from the NASA