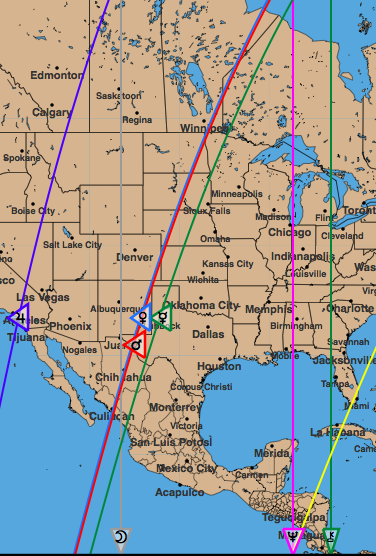 Tornado Alley defined by the planets

(Astrology Explored) For an area of the United States that is known as tornado alley, the fierceness of May 22nd’s tornado shocked the residents of Joplin Missouri. Even with a 20 minute warning over a hundred people died. This twister ripped a path of destruction 1 mile wide, leaving the regional hospital in tatters.

In mundane astrology, the astrology of places and events, astrologers attempt to pinpoint the location and source of likely problems. We know that certain regions of this country are likely to suffer from weather problems such as mudslides and wildfires in California, severe winter storms in the Northeast. “When”, “where”, and “how severe” are important questions that occupy a mundane astrologer.

If we look at an Astro*Carto*Graphy map of the United States, for May 22, 2011, set for our nation’s capital we see that most of the area that is called Tornado Alley, is bounded by Neptune on the right and Mercury on the left. Thus the elements of a tornado, water (Neptune in Pisces) and air (Mercury which is ruled by air sign Gemini) bound either side of this sensitive area. If you look at the chart of NOAA chart of the United States, you will see that the vast majority of the tornados that occurred on this date are within those boundaries. END_OF_DOCUMENT_TOKEN_TO_BE_REPLACED