(Astrology Explored) Venus swings again into the heady sign of Scorpio on September 11. Yes, 9/11. There are no accidents. Venus in this placement sheds the party girl persona of Venus in Libra and gets dark, serious and seriously intense. A relationship starting during this time will test your limits of endurance, plunge the depths of how much you love and take you on a thrill ride that will either scare you or scar you. Oh, yes. It is that dramatic.

The only way to get through this time with your hide intact is to be brutally honest with yourself when you stare into the abyss. If you lie, well . . . you’ve been warned.

To give you more of a background of what Venus in Scorpio means I’m linking you back to my original series of posts on this theme. Featured is the original Mistress of the Dark herself, Persephone, and how her quest illuminates our own in searching the dark and the light.

First, however, a post about her handmaiden, advisor and wing man, Hecate.

Hecate —The “Dark” Goddess & The Space Between

The Astrology of Venus in Scorpio: Persephone and Pieces of Rose, Part 1

The Astrology of Venus in Scorpio: Persephone and Pieces of Rose, Part 2

The Astrology of Venus in Scorpio: Persephone and Pieces of Rose, Part 3 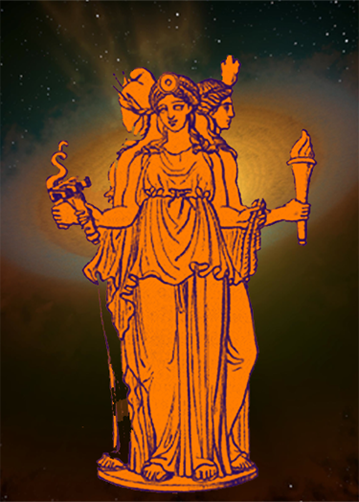 note: play YouTube video at the end while you read

It didn’t take me much prompting to get serious with my astrology studies, even with the “or else” ringing in my head whenever I started to slack on my studies. Soon I found an astrologer giving weekly classes in a mid-level group who took me on with some reservation. Her reservations however didn’t last long.

Who this entity was, though, eluded me many years until I stumbled upon a Celtic goodess the Morrigan, and her earlier incarnations, one of them being Hekate.

Modern times has Hecate, the third of the goddess triad of the mystery religion, the Elysian mysteries as a crone, or hag associated with witchcraft. However, there is evidence that the ancient Greeks did not view Hecate as an old woman, but rather as a young maiden and her role was very different from that of a purveyor of magic.

The ancient role of Hecate is obscured by the very veil of mystery the congregants of the Elysian Rites spread over their practice. Only a few scrapes of the rituals remain in texts, though it appears to be a religion based the idea of resurrection and the return to the source of life.

Hecate, in the Greek myths, attends to the wife of Pluto, Persephone, the daughter of the earth mother, Demeter. Persephone’s essential role is that as a bridge between life and death, spending half of the year in the underworld with her husband and half of the year on the earth with her mother.

Hekate assisted Demeter in her search for Persephone, guiding her through the night with flaming torches. After the mother-daughter reunion became she Persephone’s minister and companion in Haides.

Hecate’s twin flaming torches are said to be twin aspects of ever present Venus, as the morning star and evening star, the beginning and the end of the day.

But what is Hecate doing with these torches and why is she guiding goddesses in their quests and journeys? The answer to this question reveals Hecate’s essential nature.

In Greek statuary, Hecate’s image would be shown on panels in a three sided triangular column and placed at door posts and crossroads. Thus Hecate could watch the road in front of you, in back of you and the place in between front and back.

The places “between” were of special concern to the Greeks. In the story of Ulysses, he and his crew had to pass through the channel containing Scylla and Charybdis. Wikipedia tells us:

Scylla and Charybdis were mythical sea monsters noted by Homer; later Greek tradition sited them on opposite sides of the Strait of Messina between Sicily and the Italian mainland. Scylla was rationalized as a rock shoal (described as a six-headed sea monster) on the Italian side of the strait and Charybdis was a whirlpool off the coast of Sicily. They were regarded as a sea hazard located close enough to each other that they posed an inescapable threat to passing sailors; avoiding Charybdis meant passing too close to Scylla and vice versa. According to Homer, Odysseus was forced to choose which monster to confront while passing through the strait; he opted to pass by Scylla and lose only a few sailors, rather than risk the loss of his entire ship in the whirlpool.

In traveling to the Underworld, the soul would first pass through and underground passage to encounter the River Styx, the dividing line between the world of the living and the world of the dead. Once a soul crossed the river, they would be forever bound to the realms of the dead, and their ultimate fate.

Hecate herself seems to a version of the Sumerian war goddess Innana, and later Istar, who were identified with the planet Venus. In Innana’s own story is an episode where she died in the halls of the Underworld ruled by her sister Ereshkigal and was resurrected by actions taken by other gods. Thus identified with a version of Venus, it is not so unusual for a dark aspect of Venus to be bearing the torches that associated with Venus.

With Persephone’s essential role is that as a bridge between life and death, spending half of the year in the underworld with her husband and half of the year on the earth with her mother it was Hecate’s specific task to act as a guide as Persephone journeys taking her through the places “in between”.

The place ‘between” then was a place of transition, the end of one thing and the beginning of another. Hecate, in bearing the torches of beginning and ending, was the guide through the place “in between”.

What then can we say about Hecate in our charts?

In astrology, Hecate is asteroid 100. To find the position of Hecate in your chart go to Serennu’s asteroid page and enter your chart info and the number of the asteroid.

In my personal chart Hekate is buried deep within my twelfth house, poised between my Mars in early degrees of Taurus and my Ascendant in late degrees of Taurus. Talk about your prophetic utterances! She is sextile my Moon in Pisces and squares my Sun/Chiron combination in Aquarius. This Sun/Chiron combo opposite my Uranus is the marker in my chart for my profession as an astrologer. With Hecate in challenge aspect to this no wonder she said, “Or else!”

If you look up your Hekate, don’t get too worked up if you don’t find a direct connection with other planets in your chart. If I was counseling on Hekate’s position, I would look to see if she was making a conjunction or tight aspects to any personal planet and check out where she was by house. If nothing was going on currently but I saw that there was a transition coming on, I would look to her house position and the ruler of the house to see where you might get guidance on handling the transition.

Despite Hekate’s fearsome reputation, there is no need to fear her. If she is grim, it is because she’s walked places few mortals have tread. Nontheless, there is no better guide for the places “in between”.