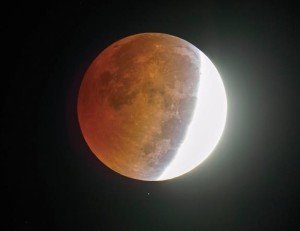 Since the time man started to parse the heavens, we’ve used the stars as an excuse to proclaim God’s (or gods’) righteousness will descend upon us on such and such a date.

The idea of a “blood moon” serving as an omen of the coming of the end times comes from the Book of Joel, where it is written “the sun will turn into darkness, and the moon into blood, before the great and terrible day of theLORD comes.”[4] This phrase is again mentioned by Saint Peter during Pentecost, as recorded in Acts,[5] although Peter says that date, not some future date, was the fulfillment of Joel’s prophecy. The blood moon also appears in the book of Revelation chapter 6 verses 11 – 13, [6] where verse 12 says ” And I beheld when he had opened the sixth seal, and, lo, there was a great earthquake; and the sun became black as sackcloth of hair, and the moon became as blood.”

The is no different for the today’s Red Blood Moon, a brief lunar eclipse visible on the East Coast for barely an hour at dawn. Supposedly this particular blood moon has special significance: END_OF_DOCUMENT_TOKEN_TO_BE_REPLACED