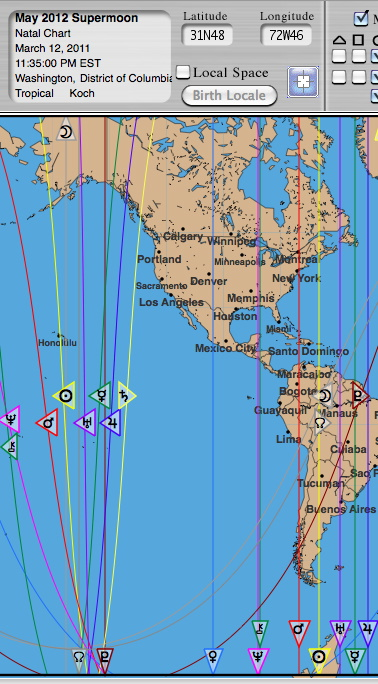 (Astrology Explored) Even the moon’s orbit is slightly elliptical. Many of us know that the orbits of the planets are not perfect circles, but ellipses, circles that appear elongated. The astronomical event called a “supermoon” occurs when as astrologer Richard Nolle tells us “the Moon is at 90% or greater of its mean
closest approach to Earth (perigee).”

The dramatic result that the moon appears larger in the sky than at other times during the year. However, while it is a great visual display, most modern astrologers typically don’t ascribe meaning to the size the moon appears to be in the sky.

One astrologer who does watch supermoons, Richard Nolle is in the fact the person who coined that term. This is what he tells us about them:

SuperMoons are noteworthy for their close association with extreme tidal forces working in what astrologers of old used to call the sublunary world: the atmosphere, crust and oceans of our home planet – including ourselves, of course. From extreme coastal tides to severe storms to powerful earthquakes and volcanic eruptions, the entire natural world surges and spasms under the sway of the SuperMoon alignment – within three days either way of the exact syzygy, as a general rule. SuperMoon solar eclipses tend to have a wider sphere of impact, extending roughly a week before and after the actual event. And other lunar extremes (of declination, for example) can extend the geocosmic stress window by a day or two here and there in any case.

The USGS tell us this about the sublunary world:

“The distance from the surface of the Earth to its center is 3,700 miles. The thickness of the ocean lithosphere or the relatively solid skin of the earth under oceans is only 41 miles, which in relative terms is much thinner than the skin of an apple.”

If you take a look at the USGS (United State Geological Survey) website, you’ll see that earthquakes of various magnitudes happen all the time. Only if there is dramatic loss of lives and property (and maybe if its a slow news day) will the media tell you about them.

Figuring out if there is going to be a news worthy event is the trick. Astrology depends on a date, time and a place to draw up charts. You can look up a date, but what are you going to do about time and place? For a time you could use sunrise, a standard convention in the astrology world when a time is not know. But place? What are you going to do for that?

You can start with a chart of 0 longitude, Greenwich, England to get a whiff of what’s up in the world. After you do that you can choose the capital of the world of what country interests you for further study and insert that in your chart.

I use the Astro*Carto*Graphy feature on my astrology program to draw up a map of where the planets fall “on the angles,” of the chart. These angles are the Ascendant, the Midheaven, the Descendant and the IC, also known as the 4th house house cusp.

In my program, which is from Time Cycles Research, the lines are marked by the planet glyphs within triangles. A triangle pointing up is is a Midheaven line, down, the IC, right is the Ascendant, and left is the descendant. 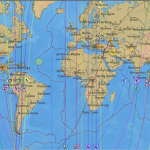 Now just as an experiment, I superimposed the Super Moon astro*carto*graphy map on the USGS earthquake map for this morning.

In this map you’ll see the planetary lines and also circles in the background. These are recent earth quakes as reported by USGS. There are two things that strike me in this chart. First,the largest of these quakes happen near Mars lines. Second is how the cluster of earthquakes seems to group for the most part in the areas where planets cluster such as over Alaska. 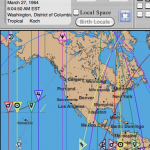 Coincidentally the planetary alignment over Alaska is eerily reminiscent of the 1964 Alaska earth quake and tsunami:

1964: March 27: The Great Alaskan Earthquake and Tsunami, Alaska: 90% of the deaths in Alaska during the 1964 earthquake and subsequent tsunamis were due to the tsunamis; largest earthquake in North America and the second largest ever recorded (largest occurred in Chile in 1960); 9 deaths attributed to earthquake; 8.4 – 8.6 on the Richter Scale; 106 deaths due to tsunamis; 115 total deaths in Alaska; other resulting deaths: Newport, Oregon – 4; Crescent City, California – 11; Kalmath River, California – 1

It’s nearly the same, but this time, Uranus, the planet of the unexpected is there too.

Thin skinned earth is poised to shake, rattle and roll during this Supermoon period. You ain’t seen nothing yet.