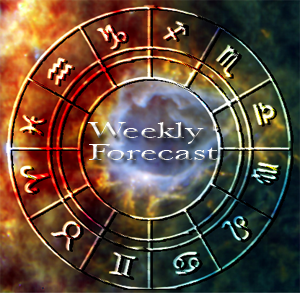 Weekly Astrology Forecast for the Week of April 15 to 21

Five planets sit in the zodiac sign of Aries, casting a wide net in their spread over the sign. The planet of the unexpected, Uranus, sits at 1 degree of Aries while the primary motivator, the Sun sits at 22 degrees. Smooshed in between is Mars, Mercury, and Jupiter. If not for Saturn in tension aspect to these planets, the freewheeling energy of the first fire sign of the zodiac would be like a runaway train. “Let’s do this! Let’s do that!” Aries will say, much like a toddler on a sugar high.

Instead, Saturn puts the brakes on, and Pluto in Capricorn says, “We need to do this way.” There is a lot of tension in our personal and business relationships. Pluto calls us to transform them in major ways. Capricorn always has a method to its madness and an agenda. With those hard aspects, it looks like someone is going to force somebody to do something they don’t like. Who will that be?

Aries—you are always prone to a certain degree of restless energy, Ram. This week however, you feel like you are going to jump out of your skin. Recognize this for what it is the need for more time at the gym. Get crackin!

Taurus—Early in the week, the moon in your opposite sign has you thinking deep thoughts about the meaning of the Universe. Don’t try to do anything about it though as you are, courtesy of the stars, as graceful as a drunken sailor. Lay low.

Gemini—Relationship issues predominate. Issues from the past loom large. Let other people have their say while you listen. Yeah, bummer.

Cancer—Other people seem luckier than you. Maybe it’s not so much a matter luck but of being the squeaky wheel. For them it works, for you, not so much. There is nothing wrong with quiet reflection.

Leo—You are the leader of the pack. Other people follow you willingly. It is so easy in fact it is easy to miss an opportunity for gain if you don’t keep your eye on the ball. Look for the end of the week to accomplish some major goals.

Virgo—You breathe a sigh of relief when the Sun moves into energetically friendly Taurus. You’ve been worn out watching your friend’s frenetic activities. Tight fisted Pluto has you controlling the cash, but you like it that way.

Libra—You are worn out by the demands friends and love ones place on you. Well, there is a price for being so popular. Hang out with fun loving Sagittarius to take your mind off your troubles.

Scorpio—Authority figures have a field day with you. They mistake your calm demeanor for agreement. You think that you are being picked on for some illusive fault. Truth is, they rely on you much more than you realize and just need you to step up.

Sagittarius—The Archer is rarely alone, and this week this is more true than usual. As much as good times call, it is important to pay some attention to your significant other. This you should do if you know what’s good for you.

Capricorn—Other people are trying to push you in a decision. You know what’s best. Holding on to your assets is never a bad move.

Aquarius—You enjoy some freedom of movement just long as you don’t get caught up in other people’s nonsense. Other people talk a good game, but you know mostly that its game fish. If at all possible make yourself disappear.

Pisces—The end of the week brings some support by some people sympathic to your cause. Use this energy wisely. Make that cause a good one, and not just a bid to take a few mental health days off from work.