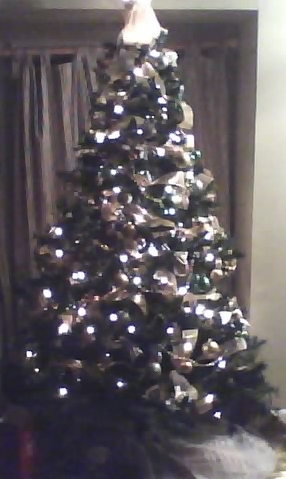 “In the Chaldean custom, Tammuz, son of the sun god Nimrod and the virgin mother Semiramus, was known as Zero-Ashta, “The seed of the woman,” and also Ignigena, or “born of the fire”. At the time of the winter solstice, the past sun god would die, his branches stripped from him – and one piece, the seed, would enter the fire on “Mother-night” as a log. The next morning, the new triumphant sun god was born from the fire as a tree, the “Branch of God”, who was celebrated for bringing divine gifts to men.

In the Bible, Jeremiah the prophet admonishes those who dare to erect such a pagan artifact: “Thus saith the Lord, learn not the way of the heathen…For the customs of the people are vain; for one cutteth a tree out of the forest, the work of the hands of the workman, with the axe. They deck it with silver and gold; they fasten it with nails and with hammers, that it move not.” (Jeremiah 10:2-6)”

Egyptians carried through the same tradition by bringing in fronds of palm trees into their homes and the Romans set up fir trees and decorated them with pieces of metal.

Ancient Celts would decorate with greenery from evergreen trees and burn a log on the solstice, celebrating the perpetual cycle of life, the death of the old Sun god and the birth of the new on the Solstice.

“The fir tree has a long association with Christianity, it began in Germany almost 1,000 years ago when St Boniface, who converted the German people to Christianity, was said to have come across a group of pagans worshipping an oak tree. In anger, St Boniface is said to have cut down the oak tree and to his amazement a young fir tree sprung up from the roots of the oak tree. St Boniface took this as a sign of the Christian faith.”

While we might be amazed that a fir tree sprang up from the destruction of an oak tree, Celtic “pagans” would not. They observed a similar thing in nature. Mistletoe is a partly parasitical plant that would spring up on woodland trees, sprouting from the seeds consumed and excreted by the bird called the mistle who found the berries of the mistletoe especially tasty. While the Celts didn’t understand the full mechanics of the parasite, they considered it to be “the soul of the tree”. Druids especially revered the Mistletoe gathered from their sacred oaks. Most likely, because Druids were prone to do this with all manner of herbs, barks and berries, they made a wine from the berries for use during Solstice rituals. Though we do not know the particulars of these rituals it isn’t a stretch to imagine why the tradition of kissing under the mistletoe became a holiday favorite.

Other posts on Christmas Traditions:

The Astrology of Christmas: Dickens and Scrooge