(Astrology Explored) One day before the April 29, 2014 Solar Eclipse a string of dangerous tornadoes started hitting the southern United States. 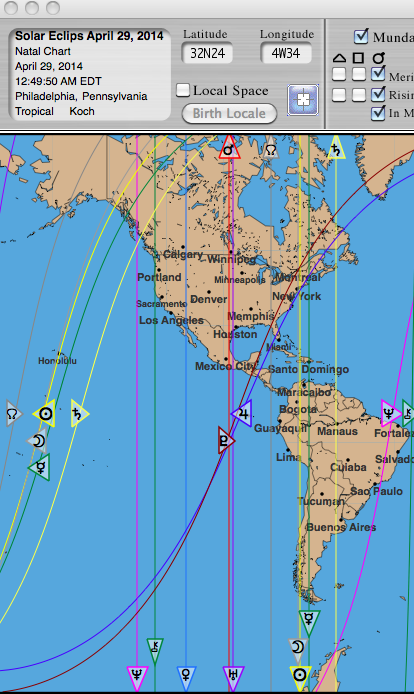 After spawning deadly tornadoes that flattened homes and businesses in Alabama, Mississippi and Tennessee, a storm system that also caused havoc in the Midwest had Georgia in its sights early Tuesday.

At least 11 people in the South were killed Monday, bringing the overall death toll from two days of severe weather to at least 28.
In Mississippi, Republican state Sen. Giles Ward huddled in a bathroom with his wife, four other family members and their dog Monday as a tornado destroyed his two-story brick house and flipped his son-in-law’s SUV upside down onto the patio in Louisville.

“For about 30 seconds, it was unbelievable,” Ward said. “It’s about as awful as anything we’ve gone through.”

Tens of thousands of customers were without power in Alabama, Mississippi, and Kentucky, which did not report tornadoes but was slammed with severe storms. Thousands more hunkered down in basements and shelters as The National Weather Service issued watches and warnings for more tornadoes throughout the night in Alabama.