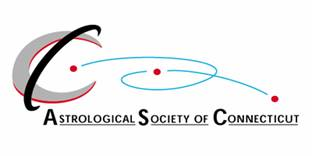 Just after the spectacular full moon in Leo, the Astrological Society of Connecticut is holding its second New Age Fair of the 2010-2011 season at the Keeney Memorial Center, 200 Main Street, Wethersfield, CT from 10:00 AM to 4:00 PM.

The time after a the full moon is a time to reflect on the activities and the accomplishments of the first half of the month. What better way to do that than getting a reading from one of the astrologers, psychics and intuitive readers at the fair. Whether you’ve had readings before or just curious this is an excellent way to meet with experienced counselors and get a taste of what they have to offer.

At the fair are a variety of vendors of often hard to find books, crystals, New Age jewelry, hand crafted soaps, perfumes as well as other items.

Through out the day there are free lectures.

11:00 a.m. Relationship Aspects in the Sacred Mayan Calendar – Gevera Bert Piedmont
Starting a business? Thinking about getting married or adopting a child? Wondering about a new love relationship? There is a simple way, using the 260-day Sacred Mayan Calendar, to get a snapshot of the energy of two (or more) people, or even a person and a calendar day. Time permitting, relationships from the audience will be parsed.
Gevera Bert Piedmont is the author of the Jaguar Nights series of Mayan-Aztec calendars and related books. She offers horoscopes and a variety of readings based on those calendars through www.ObsidianButterfly.com

12:00 p.m. What’s Your Sign? Has It Changed? – Janet Booth
A lot of hubbub ensued last month when astronomers announced a new sign and re-assigned calendar dates for the zodiac. We’ll look at what was behind this statement and how that affects your sign. (Hint: It has NOT changed, at least not according to astrologers!) Bonus: find out how the answer relates to the Age of Aquarius.

Janet Booth’s astrological studies since 1976 built on her BA in Behavioral Studies from Drew University. An ASC member since 1978, she was president at the millennium. For 30 years, she’s been in practice and taught and lectured on all levels of astrology. She’s hosted “Looking Up” on West Hartford cable TV and her “Janet’s Plan-its” calendars have been sold throughout North America since 2001.

1:00 p.m. Playin’ with the Queen of Hearts – Karen Hollis
Karen will talk about relationships, both committed and non-committed, dating, and the suit of Hearts in the regular deck. Some people who attend the lecture will be asked to pick out a card from the regular deck’s suit of hearts. Based on the card that they pick, Karen will do a mini-read of how they view their relationships in the present. Karen’s lectures are insightful and entertaining!
Karen Hollis is a clairaudient intuitive and successful business woman whose clients span the globe. For more than 25 years, Karen has used her unique skills as a means to help individuals and organizations tap into their intuition and make meaningful decisions. Her clients value the accuracy, integrity and compassion Karen brings to her work. Karen believes that it is her soul’s purpose to now help individuals find happiness by accessing their inner knowing through the cards.

3:00 p.m. Jennifer Page – Meditation (this is what she did in Nove 2010)
Today Jennifer will speak about cleaning and claiming our own energy field, our guides, and differentiating between our own emotions and fears vs. our intuitive insights. She will then guide us on a meditation to one of her favorite journeys, to our own “Temple in the Clouds.”
Jennifer Page has over 20 years experience working in the metaphysical arena, her spiritual awareness began when she was a child. Between the guidance of the Masters and the playfulness of the fairies; Jennifer is aware of how important it is to remain balanced between the spiritual world and our daily lives. Growing up in this manner Jennifer has learned to overcome challenges that sensitive people often experience. It is her goal to assist others in their learning process so they can harness their abilities and become the powerful, unique person they are meant to be. Jennifer utilizes her experiences, Reiki, hypnosis, NLP and intuition in this process.

The Astrological Society of Connecticut is a 501(c) 3 non-profit organization; one of the largest and most active local astrological organizations in the United States, it is dedicated to educating people interested in astrology, sponsoring lectures, workshops, fund-raising fairs, and social activities.

Professional astrologer and lecturer Gloria Star will explore the nature of the eclipses at her lecture Darkness and Light: The Influence of Eclipses February 17, 2011, 7:00 PM at the Astrological Society of Connecticut. 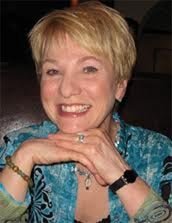 Gloria Star lectures at the Astrological Society of Connecticut

Eclipses command the attention of astrologers and the public alike. Regarded as evil omens in ancient times, our understanding of eclipses has grown to include their influences on different parts of our lives. Like bookmarks, eclipses “time stamps” the configuration of the position of the planets at the time of the eclipse revealing issues that demand our attention.

Gloria will bring to life the meaning of eclipses explaining Saros Cycles, the Prenatal Eclipse, Nodal Returns, and more. Find out how and when eclipses are more relevant to your own life, and when the eclipses are more like watching a movie.

The Astrological Society of Connecticut is a 501(c) 3 non-profit organization; one of the largest and most active local astrological organizations in the United States, it is dedicated to educating people interested in astrology, sponsoring lectures, workshops, fund-raising fairs, and social activities.

The favorite is the Greenbay Packers. The underdog, if you ever dare call them that, is the Pittsburgh Steelers. The point spread is 2.5. Does anyone really think this game isn’t going to be gut gripping? I don’t know if I can watch, so I may consign myself to the kitchen making pizzas.

Why is Greenbay considered the odds on favorite?

Andrew Patterson, a Las Vegas based oddsmakers explained that the Green Bay Packers have been considered to be a hot team for the past few weeks and the fact that Packers are being favored over the Steelers is just a continuation of it.

Greenbay won five games straight to get to the Superbowl. Obviously they are motivated and this can’t be discounted. But the last time the Steelers and Packers met, Steelers won in high scoring game by just one point.

Just because there is close point spread, doesn’t mean it will be a close game. The average final point spread in a Superbowl game is 10.4 points.

Obviously, at some point in the game, a team loses momentum and the other team exploits it. Either a player gets too hot and makes foul and puts the other team in a better position which is exploited, or the ball is turned over in an interception, or in someway the timing of the game is disturbed.

Like chess it is playing the numbers. In chess, you can count the points of the men you have on the board, and you can extend that to their positions, roughly, gauging the strength of your position by how many spaces on the board they command and how much time it will take to reach your objective.

Which is why astrology is so well suited to hazarding a guess on the winner of the Superbowl. So far I’ve scored 1 out of 2, and you can fight it out with the mathematicians on how statistically significant that is.

Let’s look at the teams and see who the stars favor.

We only have the dates of the teams inception from Wikipedia, which is a blessing, since these dates on some teams is scarce. I put the “time of birth” at 9:00 AM for both teams, something that I do for business entities but which most other astrologers won’t.

We can’t comment on house positions or the ascendant, though is seems fairly obvious both teams have their Moon in Aquarius.

Curiously both sports teams have their Mars position in zodiac signs not known for their aggressiveness. Greenbay has theirs in home loving Cancer and the Steelers has theirs in the diplomatic sign of Libra. Neither team has their Mars in a Gauguelin zone that notes sports eminence.

By progression however, the Greenbay Mars has moved to meticulous Virgo, traditionally ruled by Mercury. It joins the Packers Saturn there squaring progressed Mercury in Sagittarius. Now the Greenbay quarterback has been characterized as “on fire” by armchair pundits in this household and this Mercury certainly seems to describe him.

By progression, Steelers Mars is in the sign of Scorpio, which was traditionally ruled by Mars and is making a trine to the Steelers, Pluto, the planet of power and control.

In fact this natal Pluto sits squarely on the natal Packer’s Mars. This gives a slight edge on this evenly matched pairing, but is is enough to declare a victory for the Steelers?

Let’s look at the transits.

On the other hand, Mercury, the planet of communications, conjuncts the Packers Moon. We can’t count out the Packers quarterback as he seeks to prove that he is the best quarterback of all time.

With all this Aquarian energy, the probably is high for turnovers and interceptions. Both teams will be frustrated by their inability to move the ball down the field. Again the armchair pundit says, “whoever loses the ball, loses the game.”

The planet Jupiter, the planet of abundance, usually has a say in who is going to win. Here Jupiter makes a trine to the Steelers Venus and Mercury in Leo combination, conveying a slight edge to the Steelers quarterback.

But what really hurts the Packers is where Jupiter is sitting with Chiron, the planet of wounds and injuries. This Chiron is in harmonious energetic connection to the Packers natal Jupiter, which isn’t necessarily good. It just means that the Packers play with a lot of injuries and with transiting Jupiter sitting on this Chiron this will be evident in the game play.

Despite the Greenbay quarterback being “on fire”, no one person wins a team sport. If there are indeed too many injuries on the Packers side this may be the component that tips the scales to the Steelers, no matter how evenly matched the teams are.

And then there is that matter of the Steeler’s Pluto sitting on the Packers Mars. In terms of “weight” Pluto is the stronger planet. And what gives this Pluto a little shove is the transiting Part of Fortune conjunct this Pluto.

So its the Steelers, though the Lord knows many of us will be on the edge of our seat until that final goal is scored.

Post Game Note: So I didn’t get the winner right. *Sigh*. But injuries did figure prominently in the development of the game. 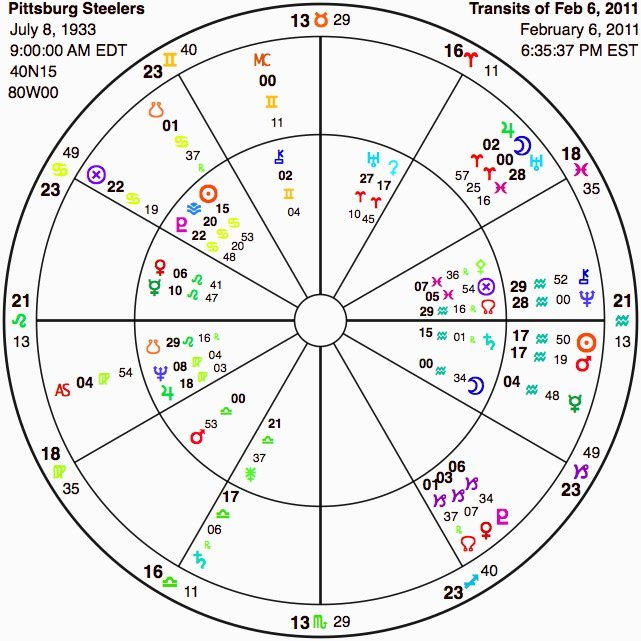 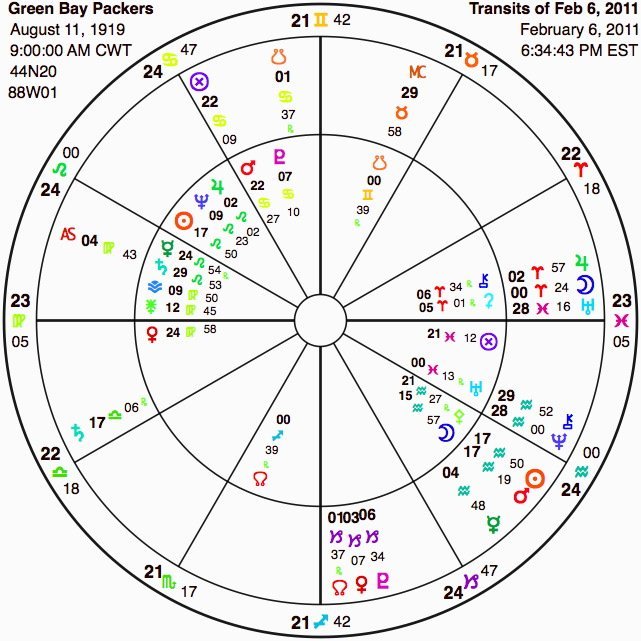