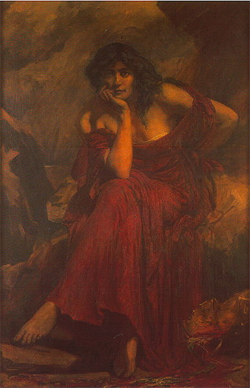 The entrance of the Sun into the last of the Cardinal signs had a special significance to the ancient Celts. While this time is the start of the sign of Capricorn for us, in the Celtic lunar calendar this event happens at the end of the Month of Elder, called Ruis (sounds like “r’ uhish”) and marks the birth of the “new king” that will reign over the year.

Solar, signifying the masculine and lunar events corresponding to the feminine principle had equal importance in the complex mythology of the Celts. The day before the ingress signified the death of the old Sun, which then become the prisoner of the King of the Underworld. The New Sun is born on the Winter Solstice as the child of the goddess Ceridwen. The Sun was regarded as the son of Ceridwen, and the God Celi, incomprehensible spirits from whom all life came.

Ceridwen bore a child that was so ugly she despaired of his future. She decided to use her magic cauldron that could make a portion that would grant great wisdom so at least her son could have that.

“The mixture had to be cooked for a year and a day. Morda, a blind man, tended the fire beneath the cauldron, while Gwion, a young boy, stirred the concoction. The first three drops of liquid from this cauldron gave wisdom; the rest was a fatal poison. Three hot drops spilled onto Gwion’s hand as he stirred, burning him. He instinctively put his hand in his mouth, and instantly gained great wisdom and knowledge.

Ceridwen chased Gwion. He turned himself into a rabbit. She became a dog. He became a fish and jumped into a river. She turned into an otter. He turned into a bird; she became a hawk. Finally, he turned into a single grain of corn. She then became a hen and ate him. When Ceridwen became pregnant, she knew it was Gwion and resolved to kill the child when he was born. However, when he was born, he was so beautiful that she couldn’t do it. She threw him in the ocean instead, sewing him inside a bag of sealskin. The child did not die, but was rescued on a British shore by a Celtic prince named Elffin; the reborn infant grew to became the legendary bard Taliesin.”

Gwion represents the non-initiated soul, one, who in the service of the Goddess of Wisdom, is reborn as a “divine child replete with knowledge”. It suggests that wisdom is ultimately received from an acceptance of feminine knowledge of the divine essence of the cycle of life.

The divine child is born on the day of the Winter Solstice but he remains hidden from us until the first day of the new lunar calendar of the year which is usually around December 24th. The time during the divine child’s birth and this day is known to the Celts as the nameless day. This day that falls outside the thirteen sign, twenty-eight day dichotomy of the lunar calendar. It is sacred to the Queen of the Underworld, Arianhod. It represents the part of feminine wisdom that always remains concealed.

Helena Paterson, author of “The Celtic Lunar Zodiac” says of people born on this day:

People born on this ‘nameless day’ have a cosmic spiritual awareness-time travelers, akin to Australian Aborigines whose dreamtime reflects an evolving creation and creator.

More than the shortest day of the year, the Winter Solstice marks the time of the revelation of the timeless nature of the cycles of life. It tells the story of rebirth of the human spirit, the archetypal spiritual acolyte in all of us, to seek the lessons and the wisdom of the year to come.