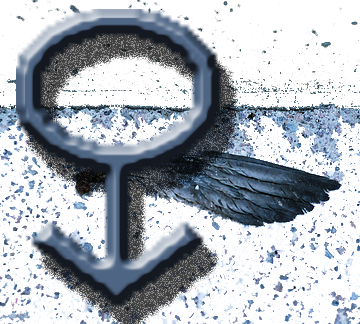 (Astrology Explored) Eris, the black winged goddess of Strife is a portion of the Sumerian goddess Innana, :

Inanna could be wily and cunning. She was a powerful warrior, who drove a war chariot, drawn by lions

Innanna ruled as a goddess during the dawn of human civlization and not only represented strength in battle, but also:

When the patriarchal tribes of Northern Greece over ran the Southern matriarchal tribes all the goddesses, including Eris, suffered a reduction in power and influence as the new patriarchal religious forms supplanted matriarchal forms. Those goddess images that survived with good press, Venus, for instance, morphed from stronger images of War Goddesses, to more docile forms. Eris, as “queen of battle” didn’t translate well into the new dichotomy and therefore became an “outsider” in the patriarchal Greek pantheon.

Eris defines the part of ourselves whose essential nature is as odds with our current cultural norms. This part of us stands against “what everyone does”. With Eris now recognized in our solar system and now part of our developmental path as a species, this is the time for us to recognize that true inner voice that does not bend to the will of the many. We may kick up some discord, but it is for our own good.

Eris in the Houses END_OF_DOCUMENT_TOKEN_TO_BE_REPLACED